From the 120 entries submitted in 2009, only 7 winners were chosen in the North American Technology category. Not only is the Renaissance Rumford 1000 the first fireplace ever to win a “Clean Air Excellence” award, but Renaissance is also the first Canadian company to have received that honour.

And we thought our popularity was based on people loving our fireplaces because of their incredible fire and flames. Now they can love their award-winning clean technology too! 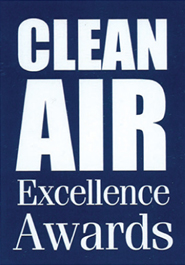 Along with many other entries, the Renaissance Rumford 1000H fireplace was closely studied by the architect judges at Toronto’s annual IIDEX show.  While we’d had the Rumford model under scrutiny to evaluate its emissions, the architectural and design community had other requirements above and beyond the fireplace’s environmental impact: the fire had to be large enough to make it the focal point in the room, the fireplace design had to meet aesthetic expectations, and its facing had to lend itself to a variety of styles. The Renaissance Rumford impressed one and all and earned us an IIDEX award.

Though the Renaissance Rumford earned itself the Clean Air Excellence award from the American Environmental Protection Agency (EPA) for its outstanding performance, the Renaissance Rumford was designed to look as good as it works. It features a beautiful herringbone firebox with a unique counter-weighted guillotine glass door which, combined with its clean face, offers carte blanche to fireplace designers and this was key to it being recognized by the architectural and design community.

The Vesta Awards are the fireplace industry’s most prestigious awards.  They are granted in a number of categories ranging from patio and barbecues to wood and gas fireplaces.  The annual Vesta awards recognize product innovation and are granted solely based on creative design and new product engineering.

Each Vesta award category recognizes only one product per year and only within the product’s launch year in an effort to recognize continuing innovation. In 2008, the Renaissance Rumford™ 1000 was the first product to ever win three Vesta awards in one year.

The Renaissance Rumford 1000 was the recipient of the following Vesta awards:

This award is self-explanatory and goes to the best new fireplace.

This category was proposed as a one-time challenge to fireplace manufacturers. It involved creating an open burning fireplace that burns cleanly, ideally emitting less than 5.1 g/kg (passing grade of the EPA’s Voluntary Wood Burning Fireplace Program). Not only did the Rumford pass the 5.1 g/kg marker, but it exceeded it by an additional 40%. Consequently, though the Renaissance Rumford was the only open fireplace to meet the requirements of the Vesta challenge, its ultra-low emissions have become a benchmark for future generations of fireplaces.  Read more about the Vesta Challenge.

This award goes to the product considered to be the most innovative of all new hearth products. It is the most sought after of all the Vesta Awards.

This Vesta award is given to the product considered to be the most innovative in its category. It is the most prestigious of all Vesta Awards. Renaissance Fireplaces™ always strives to be among the most innovative manufacturers in the industry. Winning a record number of awards granted solely for innovation is truly a great privilege. Click here to learn more about the Vesta Awards.